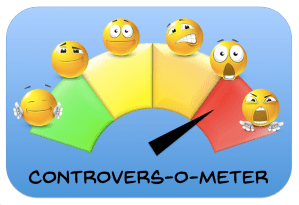 Well, that was an interesting week. Apparently cranking the controvers-o-meter to the max ends up breaking the internet and “setting the mommy blogging world on fire” as one person put it (I really gotta make sure to put that button somewhere where I won’t accidentally lean against it). Did I think my last article would strike a chord? Yes. Did I think it would go volcanic? Uh…no. It has been a fun ride though.

The response, although overwhelmingly positive, has been varied. Writing is a bit like creating a connect the dots puzzle. The quality of the image you get in the end is a reflection of both how well I placed and numbered the dots and how well you drew the lines. A lot of people picked up exactly what I was putting down. Awesome. Others, after looking at the final picture, divined meaning I never intended nor even considered. That is also awesome. Awesome that people think differently than I do, better than I do, and are willing to voice those thoughts, even if they can be critical at times. I write because of these two awesomes. The former being the awesomeness of validation, the latter the awesomeness of perspective and reevaluation.

There were still many other people, who just saw a jumble of dots and started doing their own thing. “One, seven, fourteen, twelve…looks like a tail, it’s a dog, the dog’s got a knife in its head, Mike wants to kill puppies! Mike’s a puppy killer!” I could try and write clarifications for some of this, but it would be a bit like the traffic sign I used to always see in Houston that read “Obey Warning Signs. State Law.” If you ain’t paying attention to traffic signs already… As an aside, I would love to see how that meeting at the DOT went down.

One of the comments I reflect on most came from one of my closest friends, who sagely said: “Thayer, you’ve literally never had this many people hate you in your entire life.”

And in some respects it’s true. Over the last week I’ve been called stupid, an idiot, barf, a douche (this one seems to be a favorite among my critics), a mansplainer, a porn addict, anti-woman, and on and on. It’s not like I appreciate these titles, but I honestly don’t really mind the criticism. I even get a good measure of twisted amusement from the really good ones. Look, as the age-old proverb goes: “one cannot proclaim a strong opinion without someone, somewhere thinking they are a douche.” And believe it or not, in a roundabout way, this is exactly what I set out to do.

Expressing a belief is a bit like playing laser tag down at the ol’ Nickel City: If you want to hit the target, you got to expose yourself. Plain and simple. You can stay huddled in a corner behind that florescent painted barrel if you want. You’ll never have to get hit. But I wanted to spark a conversation. I wanted to shed light on something that I felt was festering in the shadows. And to do that I had to come out from cover and expose the little blinking lights on my shoulders, chest, back and gun.

It was fascinating to see the reaction and discussion, but whether people liked it or hated it, thought I was brilliant or thought I was a talentless, bitter, misogynistic hack, the most fulfilling aspect of my 15 seconds of fame was simply that people (a lot of people) were having a discussion. In some ways I think this is getting harder to do today despite having unprecedented communication tools at our fingertips. People talk and share stuff, for sure, but discussing one’s true, deeply held beliefs is becoming an ever riskier proposition these days.

To continue the laser tag analogy, I don’t even think that most people stay hidden behind cover because they’re afraid of getting shot at; I think they’re afraid of being unfairly disqualified from the game altogether or banned for life for violating a rule they didn’t even know existed, nor agreed to. Said another way, people are terrified of being on the business end of a political correctness witch hunt.

The debate strategy de jour isn’t to discuss opinions, it’s to dismiss the opinionator. The quicker you can ram someone into your brain’s existing narratives of bigot, misogynist, homophobe or equivalent, the quicker you can disregard anything and everything that person says. Mike’s a man explaining problems that women have, he’s mansplaining, he’s a mansplainer, mansplainers are stupid, Mike’s stupid, moving on. He’s judging people, you shouldn’t judge, I can ignore judgmental statements, moving on.

Some people believe that repeatedly yelling “bigot” or “racist” or “misogynist” at the top of their lungs is akin to reciting some all-powerful incantation to exorcise the three demons of political correctness: offense, confronting information, and dissenting opinion. What they don’t realize is that they look about as ridiculous as the old dude in My Big Fat Greek Wedding who sprays Windex on everything. If this is you, please do the world a favor and stop trying to windex away the bits of life that make you uncomfortable. Put the bottle down, stand firm, and actually put together a reasonable counter argument.

In addition to that, I welcome counter arguments with open arms. I personally approved every single one of the 350+ comments on my last post. So if you’re wondering whether or not I saw them, I did, and I waved them all through. I want people to look at my work with a critical eye and let me know what they think. My goal is to encourage debate, not silence it.

Look, be as accepting or judgmental of me as you want to be. I would actually like to hear about it either way, and I’ll tell you one reason why. For over three years I worked on a construction site in rural Australia. The language that I heard on a daily basis makes the old high school football locker room talk seem like something Elsa would sing to a snowman. Think of any four letter word, -ism or -phobic adjective and I heard it, some with impressive regularity and creativity. These words were said by every pigment and ethnicity about every pigment and ethnicity.

And you want to know why I absolutely love these people? Because they would take a bullet for anyone. They are the kind of people that freely give of their time, money and resources to help a bloke/sheila out, regardless of their skin color, sexual orientation, gender or ethnicity. They aren’t monsters. They had a different life than I did. They speak somewhat differently, they express themselves somewhat differently. That’s what diversity looks and sounds like. Their ways might be shockingly offensive to someone, but if you can’t see past that then you will fail to get to know and understand some of the most giving and wonderful people this world has to offer, and I pity you. Political correctness, however, would have them silenced, labeled and dismissed.

You could demand an apology from them and rend your clothing in a virtue signaling display of offense, OR you could let the prickly words wash over you for a while and try to get to know the person. I know this approach may challenge some existing narratives, or you might not currently have a folder set up to put “person who says things I find offensive, but might actually be a kind and wonderful person,” but I would encourage you to make that folder.

I’ll get to know anybody. I have an open invitation to Braxlynn if she ever wants to grab lunch and get to know the man behind the keyboard. We might still think each other tools in the end, but I’m willing to sit down, break bread and see if life doesn’t surprise me (she’ll pick up the tab obviously, but I’ll totally be there). Liberal, conservative, gay, straight, Christian, atheist, whatever. I want to hear what folks actually think. Not some watered down, conformist version of who they are. A staunch PC mindset makes this nearly impossible.

Some might say that curbing our freedom of expression and suppressing our true opinions is a small price to pay to ensure the vulnerable are protected (e.g. Kim Jon-un, Ministry of Truth, Ultron, Clu from Tron). I know some, however, who think this approach is akin to throwing the baby out with the bathwater. If you ask me, I would say it’s closer to throwing the baby out, leaving the bathwater and placing a big ol’ poopy diaper in it to marinate. Political correctness doesn’t protect the defenseless, it dilutes the cries of actual victims with a sea of perpetually offended pseudo-victims while generating a blacklist of undeserving pseudo-victimizers.

I’ve heard some assert that we actually have much to thank for political correctness. Society has come a long way in terms of civility and equality since say the 1950’s, after all. I agree, and if PC is to thank for that than I give it props, but the pendulum never stopped swinging and has now found itself leading the charge in an insatiable witch hunt. It’s like telling Will Smith’s character in “I, Robot” that technology is a good thing because it saved his life with cybernetic implants. That’s true, technology is a great thing, until an army of NS-5 robots enslave humanity. PC helping us evolve from 1950’s mentality = life saving cybernetic implants. PC today = creepy murderous totalitarian robot army.

One side of the debate might be “offensive,” but the other side of the debate is saying that you’re not even allowed to express your side of the debate. You must assimilate to PC approved speech and resistance is futile. If you’re a man, don’t mansplain. If you’re judging people, thou shalt not judge. Should we strive to be civil? Of course. But it’s not my responsibility to build your safe space by excising every piece of me that makes you uncomfortable.

If my kids hear an opinion they don’t like or that challenges them or offends them, I sure as hell won’t tell them to seek refuge in some damn comfort tent. Deal with it. Wrestle with it. Reconcile it. Talk to me about it. Study it. See past it. See through it. Break it down. Be stronger because of it. Be wiser because of it, but don’t retreat from it and don’t demand that society never says anything that makes you uncomfortable.

People, we can speak our minds and live to tell about it. If you hear something you don’t like, respond with reason…and maybe a little snargic, but don’t seek to disqualify someone from the debate because you don’t hear the exact words you want to hear. I look forward to meeting new people and I truly hope this little blogging endeavor of mine (however unlikely it seems to be unfolding) allows me to do that in a way I never thought possible, whether I agree with those people or not.